Meet the experienced and friendly doctors who make Drs. Bintz and Ellis the leading provider of vision care products and services in Elk City. 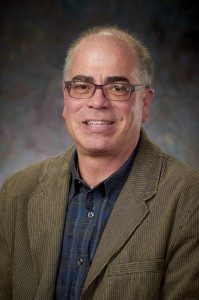 Dr. Bintz opened his practice in Elk City in November of 1984. The original clinic was in the Baker Professional Building, across from Nagle’s Snappy Sak on West Third Street. In 1987 the first clinic on Main Street was built. In 2018, The clinic moved into our new, and current, location at 920 N. Main St. During the last 30 years, Dr. Bintz has been involved in local, state, and national volunteer work.

He  did chair the Oklahoma Diabetes Coalition from 1995-1997. He has been named Young O.D. of the Year, Outstanding Young Oklahoman, Alumni of the Year, and awarded the Endres Award for excellence in diabetes care.

He is a founding partner and owner/operator of Vision Science/Acuity Pro Software. This Software Program is used throughout the World by Optometrists to assist in testing the vision of patients. NASA is a user and tester of this program with their astronauts.

Dr. Scott Ellis joined our practice in October 2004. Dr Ellis is a 1992 Elk City graduate. He graduated from SOSU with a degree in biology and graduated from the Northeastern State University College of Optometry in Tahlequah in 2001. His wife has her teaching degree from NSU and is also an Elk City High School graduate. Before joining our practice, Dr. Ellis served three years as an optometrist in the United States Army. After graduating from NSU College of Optometry, he attended an Officer Basic Course at Fort Sam Houston in San Antonio, Texas.

Upon completion of this course he was commissioned as a Captain in the Medical Services Corp. Following his training, Captain Ellis was assigned as the Officer in Charge of the U.S. Army Optometry Clinic located in Hanau, Germany. The optometry clinic was one of the busiest clinics in the entire European theater.

He was responsible for the care and treatment of over 25,000 active duty service members and their families. During his 3 years serving as chief of the clinic, Captain Ellis was awarded the Army Achievement Award Medal and the Army Commendation Medal. After finishing his tour of duty, Dr. Ellis and his wife decided that it was time to hang up the military uniform and rejoin the civilian world. After searching for a place to start their new life they both decided that there is no place like home.

Dr. Ellis is a Scout Leader, a Kiwanis Member, and makes sure our practice remains working with the Elk City Chamber of Commerce. The Ellis family are the proud parents of CADE.

“Everyone was friendly, knowledgable and helpful!”

You can schedule your next eye exam with us online!